I got home from tour to find a big box of the new promotional postcard for Elly Blue Publishing (joining its popular colleague the Bike Tour Packing List postcard): The mama robot cargo bike image was drawn by Ellie Poley. She sent it in response to my call for “sloppy drawings of robots on bicycles.” Her sweet robot family wasn’t quite sloppy enough for what I was looking for, but I fell for them in a heartbeat and she kindly gave permission to print them on postcards. So there’s that.

I received several other very charming robot bicycle drawings, like this one by Emily June Street. When not doodling robots, Emily writes fun books. I’m excited to be putting out a paperback edition of her novel The Velocipede Races in the next year. More on that soon! 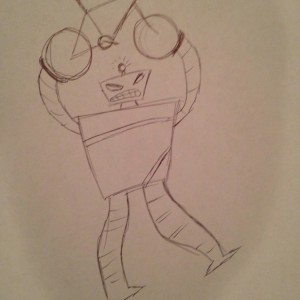 I puzzled briefly over which was drawn by whom, until Joe walked through and pointed out that one robot was clearly much more feminine than the other. That settled it! I needed the most masculine looking robot I could get for this scheme I had in mind, and Jason’s was obviously the pick of the lot in this regard.

A few seconds of mucking about with the image, and here’s the result: It may look like a cheesy ebook cover, and that is in fact exactly what it is. It is also a social experiment.

See, I had just published a short story, Butt Dial, as an ebook a few hours prior. I kindle-ized it with the sole purpose of promoting the print book that a slightly different form of the story was in.

I was feeling kind of nervous, thanks to reading too many blogs, that nobody was going to want to read my giant robot apocalypse story not because it is one very-short, halfheartedly promoted ebook among many ebooks in the world, but because of my gender. To test this theory, I decided I would publish yet another version of the story under a male pen name. And to do that, I needed a cover. And it should have a robot on it. And then everyone would buy my story and love it and find it totally convincing and then go order the book!

Or so my thinking went. At least, it couldn’t hurt to try, right?

So, armed with Jason’s robot, I went ahead with the plan. I treated both stories the same, making them the same price and offering them for free for their initial five days.

Fortunately for me, if a little sadly for science, my paranoia was all for nothing. Perhaps the title “Butt Dial” is just more compelling, or maybe it’s that title’s lo-res hot pink cover. Maybe the world really is ready for a lady to lay down the giant robot sci fi. In reality, though, I’m afraid that poor, secretive Elias Green did not do a very good job promoting his ebook, whereas Elly Blue worked her social networks a medium amount and did in fact enjoy greater success.

In the final tally, Calling on Champions yielded 62 free downloads, whereas 273 people gave Butt Dial a try for free and four intrepid people paid a buck for it, yielding a total profit to this author of nearly $2.50.

The moral of this story is threefold:
1. I may be the only person in the world who has trouble soliciting a drawing of a giant robot that is “masculine enough.”
2. This sort of experiment is in no way good science, but it is a lot of fun.
3. Ebooks are hard to sell and the money is fairly dismal, but they have their uses (see: fun, science, giant robots).

P.S. Need a robot cargo mama postcard? I’m including them in all orders from my shop that go out in the next three weeks.

P.P.S. By popular demand, I’ve created a way to just buy a few of these postcards. I never intended to stand between you and your robot bakfiets family postcards, people!